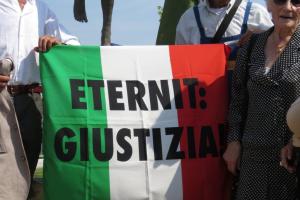 Following the verdict of the Turin Court of the Turin Court issued today (May the 23rd, 2019) in the case for manslaughter of an Eternit worker of the Cavagnolo plant and a local resident – who suffered from environmental exposure – , the accused S. Schmidheiny was sentenced to four years jail and the payment of all legal costs and damages (see the short verdict) (in absentia TN) . The Association hopes that truth and justice will also be confirmed in Appeal and in the Court of Cassation, that is to say that Mr S Schmidheiny’s criminal behaviour will be sanctioned and at long last the rights of the victims will be recognised. We will continue to fight in the other forthcoming Eternit trials , including the very big trial for the Casale Eternit slaughter trusting justice and truth will be upheld in those cases too.